Marius Noss Gundersen - classical guitarist and composer.
Norwegian guitarist Marius Noss Gundersen, born 1973, acquired his education at the Agder Conservatory of Music and the Norwegian State Academy of Music. He studied Advanced Instrumental Studies at Guildhall School of Music and Drama in London, being the only guitarist to receive a full scholarship for the academic year 2000/2001. He is also holding a Master's degree in Performing Arts from the University of Agder. Marius has had the privilege of receiving tutelage under teachers such as Per Kjetil Farstad, Per Skareng, Sven Lundestad and Robert Brightmore, and has participated in master classes with some of the world’s most prominent guitarists, such as David Russell, Roland Dyens, Marco Socias, the Assad brothers, Peter Sculthorpe and Carlos Bonell. In addition to guitar studies Marius has had the pleasure of studying composition with Johan Varen Ugland, Kjell Habbestad and Asbjørn Schaathun and has received great recognition for his compositions around the world.
“He shows great talent in composing. His “5 Cenas Brasileiras” was especially nice to listen to. 5 miniatures that really pleases the ear.” 6 of 6 stars, Smaalenenes avis

Colourful Guitar Music
The distance between Norway and South America is huge geographically, culturally as well as musically. Despite these differences, classical guitarist Marius Noss Gundersen manages to balance delicately between European classical music and Brazilian samba and Bossa Nova. Be it a prelude by the Baroque master J. S. Bach or a tune by Antonio Carlos Jobim, Marius excites and seduces his audience.
“Gundersen has a wonderful feel for the Bossa Nova rhythms of Brazil. His touch is so light and delicate, and his rhythms are so subtle and supple, that I’m sure he has made many native Brazilian guitarists jealous.” Jazzmusicarchives.com

Recognition
Marius has received numerous awards and prizes, alone and with other musicians, and he’s received great reviews for his recordings as well as his performances. Together with Gjermund Titlestad he has formed the guitar duo “Duo Gvito”, who have received great recognition from critics, colleagues and their audience around the world.
More information on the duo is available at www.gvito.com.
”Marius Gundersen and Gjermund Titlestad add to the music the colourful nuances it deserves. Their playing is precise and playful but also shows great musical understanding and grand expression in energetic performances.” - Vårt Land

Collaborations
He has worked with renowned musicians such as professor Sven Lundestad, Cecilie Rønning, Dag Einar Eilertsen, Luis Landa-Schreitt and Kjersti Stubø, and some of Norway’s most prominent composers, Ketil Bjørnstad, Lars Horntvedt and Eivind Buene have written music for him. One of his collaborations is the critically acclaimed “Bitt av Brazillen”
“It is rare to hear a band who appear so respectful for each member’s musicality and in that way achieve a unique togetherness. This is candy for the ear.” - Gjengangeren

Live
As well as several live performances on radio and TV, Marius has performed in Norway, Sweden, Denmark, England, Germany, France, Mexico, Brazil and USA.
Marius’ unique combination of his own compositions and Brazilian music makes his concerts colourful and exciting. His dialogue with the audience and his ability to describe the music he performs with humour and storytelling fascinates the audiences as well as critics.
“Gundersen has an exceptional purity of technique and effortless virtuosity.” - Minor7th.com 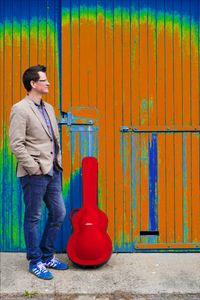